We are excited to share a guest post by author and actress, Carol Drinkwater. Years ago, I came across Carol’s beautifully-written trilogy about her experience buying a Provençal château and olive grove. The Olive Farm book led me to her book, The Olive Route – a first-hand story of the migration of this precious commodity from the Middle East into Europe. Many American’s may not be aware of Carol Drinkwater’s former incarnation as an award-winning actress, portraying Helen Herriot in the UK television adaptation of the James Herriot books All Creatures Great and Small. While living in England, I had the chance to become hooked on the series, which is available in a monumental collection on Amazon. In 2013, Drinkwater worked on a series of five documentary films inspired by her two books, The Olive Route and The Olive Tree. The films were completed in February 2013 and have since been broadcast on international networks worldwide. Penguin Books UK just published her current title, The Forgotten Summer in 2016. Carol is married to French TV producer Michel Noll.

Provence, just one relatively small part of France, is almost twice the size of Wales, with double the population. It’s a region of the south that stretches from the borders of Monaco and Italy in the east to Hyeres in the west, the Alps in the north to the sparkling Mediterranean in the south.

The corner where I live – in the olive farm of my books – is near Cannes on the sparkling, chic French Riviera, whose reputation is so celebrated – with tales of wealth, resplendence, decadence and all-night jazz hotspots – that you expect it to disappoint, yet it never does.

Queen Victoria loved the French Riviera. She visited on nine occasions and did a great deal to give this area its chic international reputation. On her first trip in 1882, she left a damp Windsor and, after crossing the Channel on her yacht, took the train to Menton, the last hilltop stop before Italy, and appreciated today for its Val Rahmeh Botanical Gardens and its exuberant Lemon Festival. 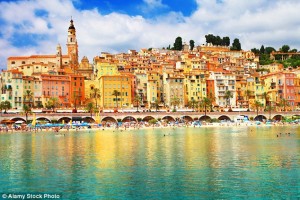 Victoria, then 63, was entranced by the palm and citrus vegetation, the sweeping views and the benign microclimate. She made expeditions along the coast, eulogising the landscape, which she later described in her diary as ‘a paradise of nature’. The local shepherds, she wrote, were ‘very handsome’ in their breeches and ‘large, black felt hats’ that protected them from the sun.

The widowed, ageing Queen returned regularly for the balmy climate, with her stays growing longer. One outing took her to the perfume town of Grasse, to Alice de Rothschild’s Villa Victoria.

Alice had bought 135 hectares of olive groves to construct her chateau. Spending a fortune, she laid out magnificent grounds and employed 80 full-time gardeners. Each year she imported tons of violets to bed in the olive groves, giving vibrancy to the silvery fields while her forests of yolk-yellow mimosas perfumed the air. 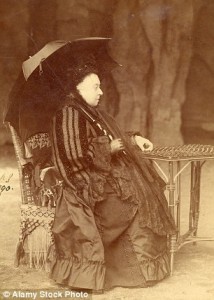 According to gossip, our doughty Queen stepped clumsily and crushed several plants underfoot. Alice, infuriated, told her Royal visitor in no uncertain terms to ‘get out’.

Other versions of the tale suggest that Victoria planted a tree, as was the tradition, digging it in herself, to commemorate her stay – or perhaps to offer her apologies?

Alice, who suffered from rheumatic fever, spent six months of every year in Grasse, returning to Buckinghamshire for the summers.

By the beginning of the 20th Century, Cannes and the coastal strip that winds its rocky way to Monaco was the winter resort for the rich, the Royals and a few well-heeled writers and artists, such as the impressionist painter Auguste Renoir. In 1907 he settled in Cagnes-sur-Mer, where he hoped to cure the rheumatism that had crippled his hands. Renoir’s home is now a museum dedicated to the artist.

Two other members of the Rothschild banking dynasty constructed sumptuous properties along this coastline. The grand Villa Rothschild in Cannes was built in 1882 by Betty de Rothschild and later bought by the local council in 1952. It has now been transformed into the town’s main library and is open to all. The Villa Ephrussi, built in 1905 by Baroness Beatrice de Rothschild, is at Saint-Jean-Cap-Ferrat and encircled by nine glorious gardens. There are breathtaking views from the grounds, and it’s now open to the public and well worth a visit.

June, the villa opens its blossom-filled gardens to artists, offering them the inspiration and tranquillity required to create – and in August, Ephrussi’s covered patio hosts a small opera festival. Although much construction has taken place around the Grasse of Victoria’s day – destroying many of the jasmine, rose and lavender-covered hills that serviced the perfumeries – a visit to the traditional perfume houses of Galimard, Molinard and Fragonard, with their old copper vats on display, is de rigueur.

Only after the Great War did the Riviera became a summer destination for tourists. In 1921, American composer Cole Porter and his heiress wife, Linda Lee Thomas, rented a house in the then-little-known fishing village of Juan-les-Pins.

They invited fellow Americans Gerald and Sara Murphy, also both heirs to fortunes, to accompany them. So enchanted were the Murphys with this magical playground that they persuaded the palatial Hotel du Cap in Antibes to stay open for the summer. Friends were beckoned south. Among the circle of guests was artist Picasso and his ballerina wife Olga Khokhlova, and the writers Ernest Hemingway and Scott and Zelda Fitzgerald.

In 1924, the Murphys bought a ‘seaside chalet’ near Plage de la Garoupe in Antibes and christened it Villa America. The summer season was here to stay. 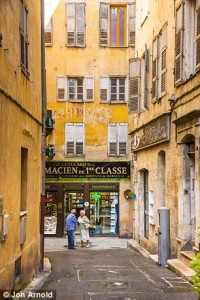 You can still get a taste of that age by dropping in to the Art Deco piano bar at the Hotel Belles Rives, once Villa Saint-Louis, the rented home of the Fitzgeralds and immortalised in his classic novel Tender Is The Night. Sip your cocktail and gaze out at the emerald sea with linen-white yachts bobbing, while a photograph of the sensual dancer Josephine Baker, with her pet cheetah, gazes down on you.

In 1923, while in Monaco, the French fashion designer Coco Chanel was introduced to the stupendously wealthy Duke of Westminster, known to friends as ‘Bendor’. The affair between the pair lasted a decade.

While out sailing along the coast in the company of his mistress, the Duke spotted a plot of land on a terraced hillside in Roquebrune-Cap-Martin. It had been part of the private hunting grounds of Monaco’s royal family. Bendor bought it and gifted it to Chanel. Incidentally, when Chanel returned to Paris after this trip, she wore a backless dress showing off her bronzed skin. Until this time, to sport a tan was judged vulgar and only peasants were bronzed. But Chanel’s appearance in the city of fashion confirmed that sunbathing on the Riviera was the new mode.

In 1928, Chanel built the exquisite villa La Pausa on the plot Bendor had given her. This hillside property remained her residence until 1953.

If you are fortunate to have friends like Bendor to take you sailing, the passage between Menton and Cannes gives marvellous coastal sightings of many iron-gated, stone-walled Belle Epoque mansions clinging to the rocks.

In 1936, the Jewish socialist and three-times prime minister Léon Blum revolutionised France by bringing in two weeks’ annual paid holiday for all employees. 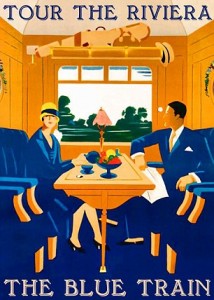 For the first time, the ordinary man could take a vacation. The luxurious Train Bleu, the Calais-Mediterranee Express which, apart from the Great War years, had been transporting the elite from Calais to the south since 1886, added second- and third-class sleeping carriages.

Middle- and working-class families were off to the seaside and the Riviera was to change for ever.

During the Second World War, the Cote d’Azur as a holiday destination closed down, but once the Allies had liberated the coast in 1944, the Riviera’s infrastructure grew rapidly.

In 1946, the Cannes Film Festival was inaugurated. Cannes was now glamorous and chic, while the international airport of Nice opened up the region to mass tourism. And so it has remained.

The Cote d’Azur has everything: walking tours, camp sites, Greco-Roman history, vineyards, beaches, glitzy casinos, music and flower festivals, chic villas, art galleries and magnificent markets. And in winter, coaches leave Nice airport every Sunday at 9am delivering skiers one hour inland to the slopes, then back home in time for dinner. The spectrum is as broad as you wish and it’s all yours. Leon Blum would have been proud.

Buy The Forgotten Summer here in the U.S. on Amazon or contact Carol for a copy!