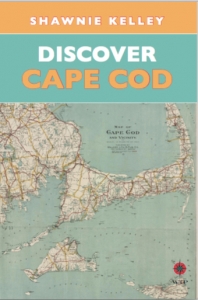 Discover Cape Cod is a book that brings history and travel together in ways that make exploring Cape Cod a rich, educational experience. From the naming of Martha’s Vineyard to the formation of the National Seashore, this book explores four centuries of colonial, maritime, architectural, and economic history in a collection of 27 short stories. Learn about an English sailor who named many the Cape’s major landmarks and how a humble fruit saved the region from economic depression. Read a story about a legendary pirate’s treasure sunken in a wicked nor’easter off the coast of Wellfleet and discover sites where important “firsts” took place.

“Traveling Cape Cod is extremely sensory-driven and deeply experiential. Every single visit I discover something new, beautiful, or sublime. It might be an unexpected slice of history, a jaw-dropping sunset, or a delicious plate of food. I’ll never stop falling in love with Cape Cod!”  ~ Discover Cape Cod Author, Shawnie Kelley

Author, Shawnie Kelley shares her passion for the Cape’s history along with suggestions for how to become immersed in region’s fascinating history. Discover Cape Cod is written in an easy-to-read style that makes it an entertaining and useful book for casual vacationers, but is also well researched to appeal to history buffs of various historical genres and general lovers of Cape Cod. We believe this combination of “history light” and experiential travel offers a unique perspective on visiting the Cape. This book encourages travelers to actively Discover Cape Cod through its rich historic and cultural offerings. Read a few snippets from the book in the excerpts below.

Cape Cod is the bared and bended arm of Massachusetts: the shoulder is at Buzzard’s Bay; the elbow, or crazy–bone is at Cape Mallebarre [Chatham]; the wrist at Truro; and the sandy fist at Provincetown … boxing with northeast storms, and, ever and anon, heaving her Atlantic adversary from the lap of the earth.
—Henry David Thoreau

Between 1849 and 1857, the author, poet, and naturalist, Henry David Thoreau spent several weeks walking the “bared and bended arm of Massachusetts,” absorbing its atmosphere, visiting most of its towns, while recording his thoughts, which culminated in to his 1865 publication of Cape Cod. The imagery filling Thoreau’s memoirs are the same images that come to mind 150 years later: sandy dunes covered with billowing grass, tall ships sunken in icy nor’easters, and the moody Atlantic Ocean battering seaside shanties. He was visionary enough to recognize the powerful appeal and thought–provoking nature of the Cape. Thoreau predicted this coast would be a place of resort for those who truly wished to experience the seaside—and he was right.

As the laden ship lumbered along what is present–day Chatham, thick fog was setting in. Knowing the waters were shallow and the shoals dangerous in this part of the Cape, Bellamy bided his time and waited for a break in the weather. When a small sloop named the Fisher slowed down near the Whydah, its captain had the misfortune of admitting to knowing the waters. Being late in the afternoon, Bellamy sent a few men aboard to seize the Fisher to help navigate the Whydah and Mary Anne through the potentially treacherous waters.

Slowly, they made their way up the east coast of the Cape with Mary Anne leading the way. The wine–filled, hundred–ton galley was followed by the Whydah, with the Fisher bringing up the rear. As it grew darker, the fog grew thicker and the waves began rising. The Mary Anne started to lag behind, but the Whydah persisted. Being mid–April, Black Sam assumed storm season was over so he forced the ships to press on, not realizing a powerful arctic wind blowing down from Canada was about to hit them head on.

On the night of July 13, 1846, the worst fire in Nantucket history struck. In the course of just seven dark hours, a centuries–old industry was brought to a screeching halt as a raging fire, fueled by the same oil that brought riches, swept through Nantucket Town, leveling everything. By morning, nearly forty acres lay in ashes, including the commercial district, factories, wharves, and most homes—leaving 800 people homeless. Even the cherished Athenaeum Library went up in flames, taking much of Nantucket’s written history with it. This devastating tragedy, now known as the “Great Fire”, not only destroyed the entire infrastructure of the city, but also led to the demise of Nantucket’s preeminent role in the whaling industry.

Prior to the Great Fire, Nantucket Town experienced a number of blazes, including two devastating fires very close together—one in 1836 and another in 1838. As a result, the Nantucket Fire Department was formed. Fire safety was a primary concern, but little could be done as fireproofing technology did not yet exist. Most of the buildings in the business district were constructed of timber and barrels of combustible whale oil were stockpiled in warehouses along the wharves. This deadly combination of wood and fuel made the downtown area a veritable fire hazard.

In the wee, dark hours of a frigid February morning, the uncanny alignment of a full–scale nor’easter and two unsuspecting tankers culminated into a chilling tale of two doomed ships, each ripped in half and awaiting what seemed an impossible rescue. On February 18, 1952, the SS Pendleton was bound for Boston, while the Fort Mercer was headed for Portland, Maine. These two World War II–era tankers of nearly identical design, carrying identical cargo, were being volleyed over 60–foot waves in the same crippling storm. If that isn’t eerie enough, both boats cracked completely in half within a few hours of each other. Four ragged halves of the two ships were thrashed about in the waves for a full day and night off the coast of Chatham. The parallel calamities of both ships resulted in the greatest U.S. Coast Guard rescue of all time.

“Ms. Kelley engages the reader with her historical anecdotes which illuminate and intrigue. Her ability to bring history alive by telling the story of the people behind the events is what makes her perspective special to me. I am always pleased to be able to take away a new nugget of information about Cape Cod for truly it is here that the beginnings of the United States gained ground and flourished.”

“A brilliant job! So interesting–exactly the right mix of stories. This makes a great gift for anyone who’s been there or has ever thought they might like to go.” Lynne Hugo, Author of Cape Cod set book “A Matter of Mercy.”