If ever there is that one bite that becomes burned into your culinary memory, the Grand Hotel’s chicken consommé was one of mine. Having spent a few glorious sunny summer days on Mackinac Island, we took our meals in the variety of Grand-owned restaurants around the property and in town. We chose to have the five-course dinner in the Main Dining Room as our last supper. While researching this trip, I learned about the dinnertime dress code. After 5pm, guest’s attire must be semi-formal throughout most of the hotel, with men required to wear a tie and jacket while women preferably in dresses or dressier pants. No denim allowed and I was fine with that! I quite enjoyed packing my Sunday best for this trip. Even though there is a general feeling of “properness” and formality throughout the day, come evening, the atmosphere of the hotel shifted into a formal dinner hour. People were dressed to the nines, including the children. Families were milling about the lobby and couples were strolling along the world’s longest porch, cocktails in hand, admiring a glistening Lake Michigan. We made dinner reservations on the earlier end of things to be able to enjoy a little swing dancing afterwards in the Parlor. Burn a few calories.

After being led to a picturesque window seat overlooking the famed porch, our server (one of the many Dominicans and other Caribbeans who work here for the summer) smilingly delivered water and baskets of bread. We were given a menu from which to choose a starter, soup, salad, entree, and dessert.  Shortly after, a procession of courses began arriving. Having felt the soup options were the least interesting, as I am not a fan of chilled soups, nor of cheesey cream soup, I “compromised” on the chicken consommé… which turned out to be the best taste of the trip. A cup of glowing clarified broth turned up with a garnish of wild mushroom quenelles and chives packed an unexpected richness of pure chicken flavor. It was so sublime we asked the server to indulge us with a second round of the deep delicious soup. The chef kindly spoiled us with an extra sixth course – another cup of that remarkable heart and soul warming consommé. I resisted wrangling the recipe from him, but have since found several online, including one by chef and food writer, Michael Ruhlman.

I must have been in the mood for duck this day having ordered it twice: a smoked duck breast with duck liver mousse as my appetizer and a zingy escarole salad. My entrée of the five spice seared duck breast was artfully plated atop a polenta cake nestled in a pool of delicious, not-too-sweet plum soy sauce. However, I couldn’t stop thinking about that consommé. We were hoping a few glasses of wine would inspire some clever tactic for acquiring one more cup, but I was not about to forego dessert to make that happen. I always joke about how white chocolate isn’t “real” chocolate, but it’s chic and for some reason, I often opt for it.  Dinner ended on a sweet note of white chocolate cheesecake with fluffy strawberry crème fraîche and almond crumble.

Overall, our dining experiences at the Grand Hotel and their off-resort restaurants were top notch and each place served up dishes that were both thoughtfully created and memorable. In the case of the Main Dining Room, it was many things…. an elegant atmosphere, smiling service, great lakefront views, and have I mentioned the consommé? 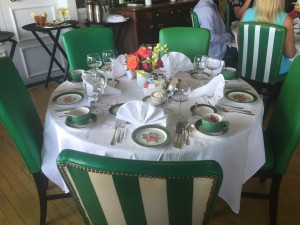 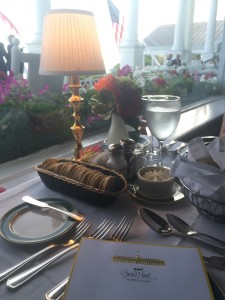 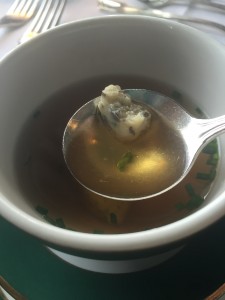 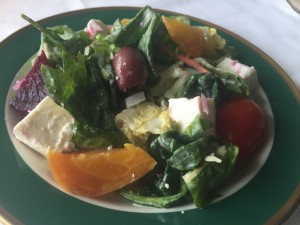 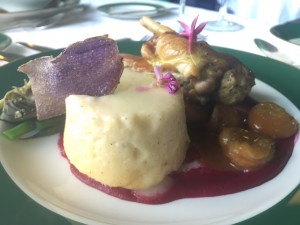 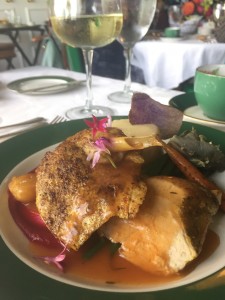 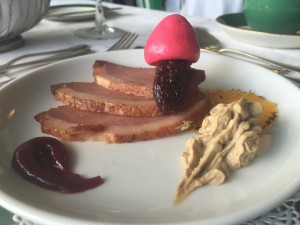 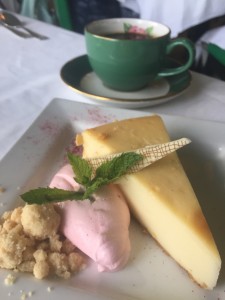 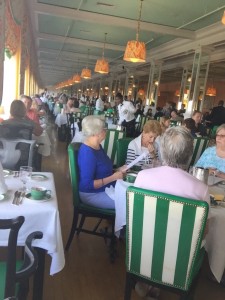 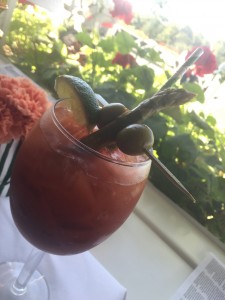 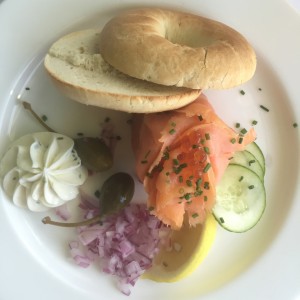 BREAKFAST in the Main Dining Room. Traditional bagel and lox.