On the Grail Trail: Great Britain

© A version of this original article by Shawnie Kelley was published in Renaissance Magazine, issue #64. Please do not reproduce any content without permission.

On the Grail Trail

Christian tradition says the Holy Grail was a cup or bowl used during the Last Supper by Jesus Christ and which, after the crucifixion, held his blood. During the early Christian era this belief was superimposed over pre-Christian and Celtic folklore in which the grail became a magical cauldron that restored life and offered its keeper eternal sustenance and wisdom. A contemporary book, The Da Vinci Code, tapped into an 1,800 year old legend making the Grail a metaphor for Mary Magdalene who bore Jesus’ offspring and continued his bloodline. No matter which story one embraces, this life-giving vessel has been the obsession of explorers, archaeologists, historians and writers for nearly two thousand years.

Our three part series explores the various grail traditions in Great Britain, France, and other parts of the world. 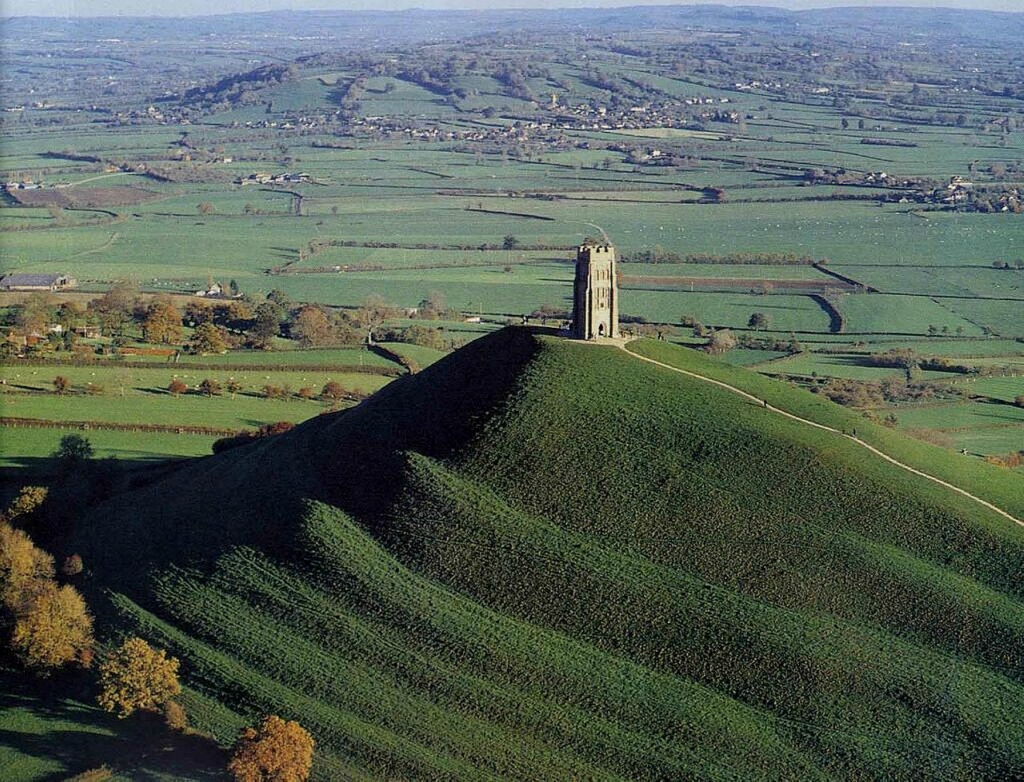 King Arthur and the Holy Grail

The Holy Grail came into popular culture during a twelfth-century literary renaissance. It was then that the Grail legend became intimately entwined with King Arthur and his Knights of the Round Table. While the earliest mentions of a pseudo-historic Arthur are found in seventh-century Welsh poetry, it wasn’t until 1135 when a monk named Geoffrey of Monmouth firmly established the great king’s legend as we know it today. Sixty years later, French troubadour Chrétien de Troyes published a cycle of stories weaving chivalry, romance, and the concept of the Grail into an Arthurian fabric. While Geoffrey of Monmouth focused on the life of King Arthur, Chrétien’s tale of Percival, one of King Arthur’s knights, provides the first account of a quest for the Grail, setting the precedent for all subsequent Grail stories. At this point in time, the vessel does not have magical powers, but the hero did have to prove his worthiness of the sacred object – a theme that quickly evolved into more complex spiritual metaphors.

Chrétien’s younger contemporary Robert de Boron gave the Grail a tangible presence in the European Christian culture.  Boron’s stories were written on the coattails of the Fourth Crusades (c. 1204) and were not only a reflection of a European culture heavy into chivalry, but also one inseparable from religion. Sacred relics and legendary treasures were carried back to Europe from the Holy Land. The Grail was allegedly among the possessions of various groups, including the Knights Templars, the Cathars, and even a band of British monks.

Glastonbury, England is where myth and history are believably skewed and a treasure trove of sacred sites lends itself to boundless mystical beliefs. In 1191, monks at Glastonbury Abbey ‘found’ the bones of King Arthur and his Queen Guinevere, thus making this the Isle of Avalon– the site where Arthur died of mortal wounds and more famously where his sword Excalibur was forged. In Celtic lore, Avalon was the meeting place where the dead came together and passed into the Netherworld. Glastonbury Tor, a haunting stone tower (also named Grail Castle) rising above a nearby hill, marks the gateway to Avalon in both pagan and Arthurian lore. It is also a reputed burial place of the Grail.

But how did the Grail end up in England? Despite the deep Arthurian connection, Glastonbury’s Grail legends go back another four centuries to stories revolving around the Biblical character, Joseph of Arimathea, one of Christ’s followers who supposedly visited Britain in the first century CE. About the same time the Glastonbury monks discovered Arthur and Guinevere, French poet Robert de Boron wrote Joseph d’Arimathe, a story tracing the “graal” (Old French for “shallow dish”) from the Last Supper to its resting place in ‘Avalon’ – presumably Glastonbury. In Boron’s version, Joseph was entrusted with the chalice after the crucifixion and in turn left it to the protection of Glastonbury Abbey while seeking refuge in Britain. The monks allegedly hid the Grail in one of England’s ancient sacred springs. The aptly named Chalice Well runs red with iron-rich water that some believe sprung forth from the cup that held Christ’s blood. Another Glastonbury legend claims the chalice is buried with Joseph on the Tor and whenever a rainbow stretches across the hill it means someone has seen the Holy Grail.

Sprawling along the windswept coast of Cornwall, the crumbling shell of Tintagel Castle whirls with legends as awe-inspiring and dramatic as the landscape. As legend would have it, this is the birthplace of King Arthur. Historically, the castle was built by Reginald, Earl of Cornwall on Tintagel Head, where according to Cornish legends the ancient Kings of Cornwall held their court. In the 12th century, writer Geoffrey of Monmouth claimed that the castle at Tintagel was where King Uther Pendragon seduced Queen Igraine of Cornwall, while her husband, Gorlois, was elsewhere at war. King Arthur was thus conceived here – and since then, writers have spun the magical tale that this was the birthplace of the noble King Arthur.

Turquoise green water laps at the shoreline where, during low tide, Merlin’s Cave is generally accessible along Castle Beach. This cave was made famous by yet another writer, Alfred Lord Tennyson in Idylls of the Kings, describing waves bringing the infant Arthur to the shore and Merlin carrying him to safety. Today, the thirteenth century castle teeters on the brink of erosion, while the beach area damaged by recent storms is currently closed to visitors for safety reasons. However, there is full access to the island and upper courtyard areas for visitors to enjoy. Tintagel Castle is managed by English Heritage and you can follow the castle developments and archaeological research on its Facebook page. Who knows? Maybe the grail will turn up here! 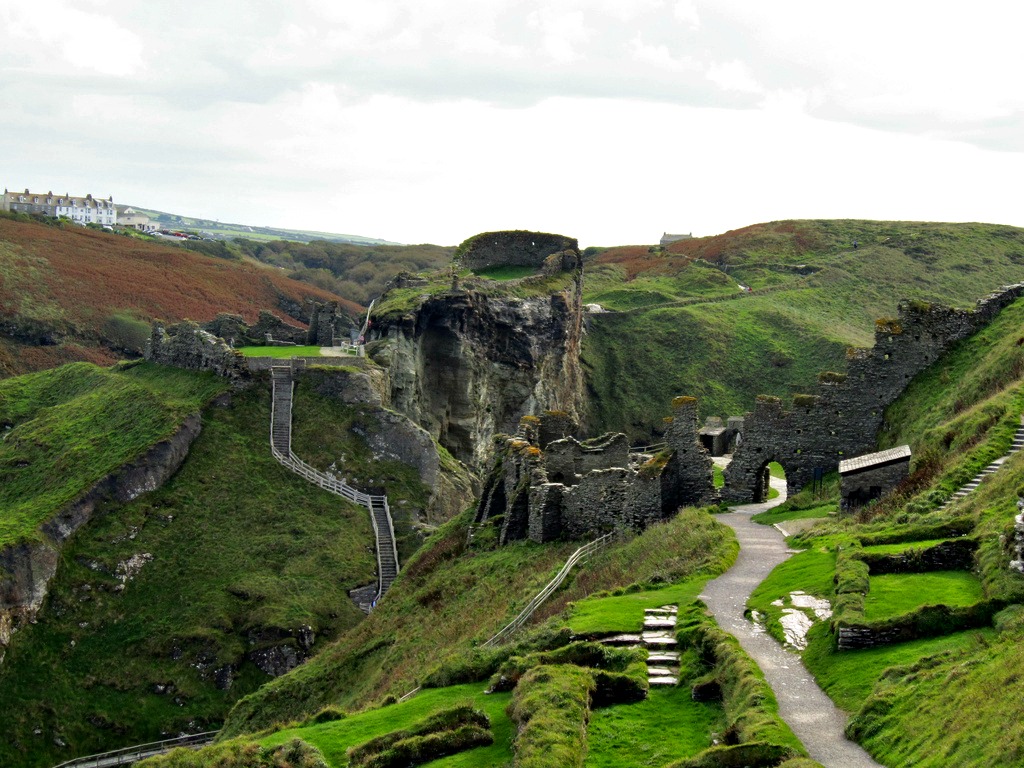 As Britain entered its Renaissance, tales of King Arthur and sacred treasures were fully engrained in popular culture. However, as medieval chivalry waned, Crusades ended, and scientific and humanist ideals began to overshadow religious superstition, the literal and esoteric quest for the Holy Grail slipped from the limelight, but did not altogether disappear.

Sir Thomas Malory’s Le Morte d’Arthur (The Death of Arthur), published in 1485, retells the old stories of King Arthur and his knights of the Round Table, but with a new interpretation of the stories of love, war, religion, treachery and family loyalty. It was written while Mallory was imprisoned during the War of the Roses, so the story’s’ tone and the behavior of his characters reflect the contemporary political injustices and social upheaval. This is the last mainstream interpretation of Arthur and the Holy Grail until the nineteenth century, when the Victorian revival of all things medieval spawned new Grail tales. 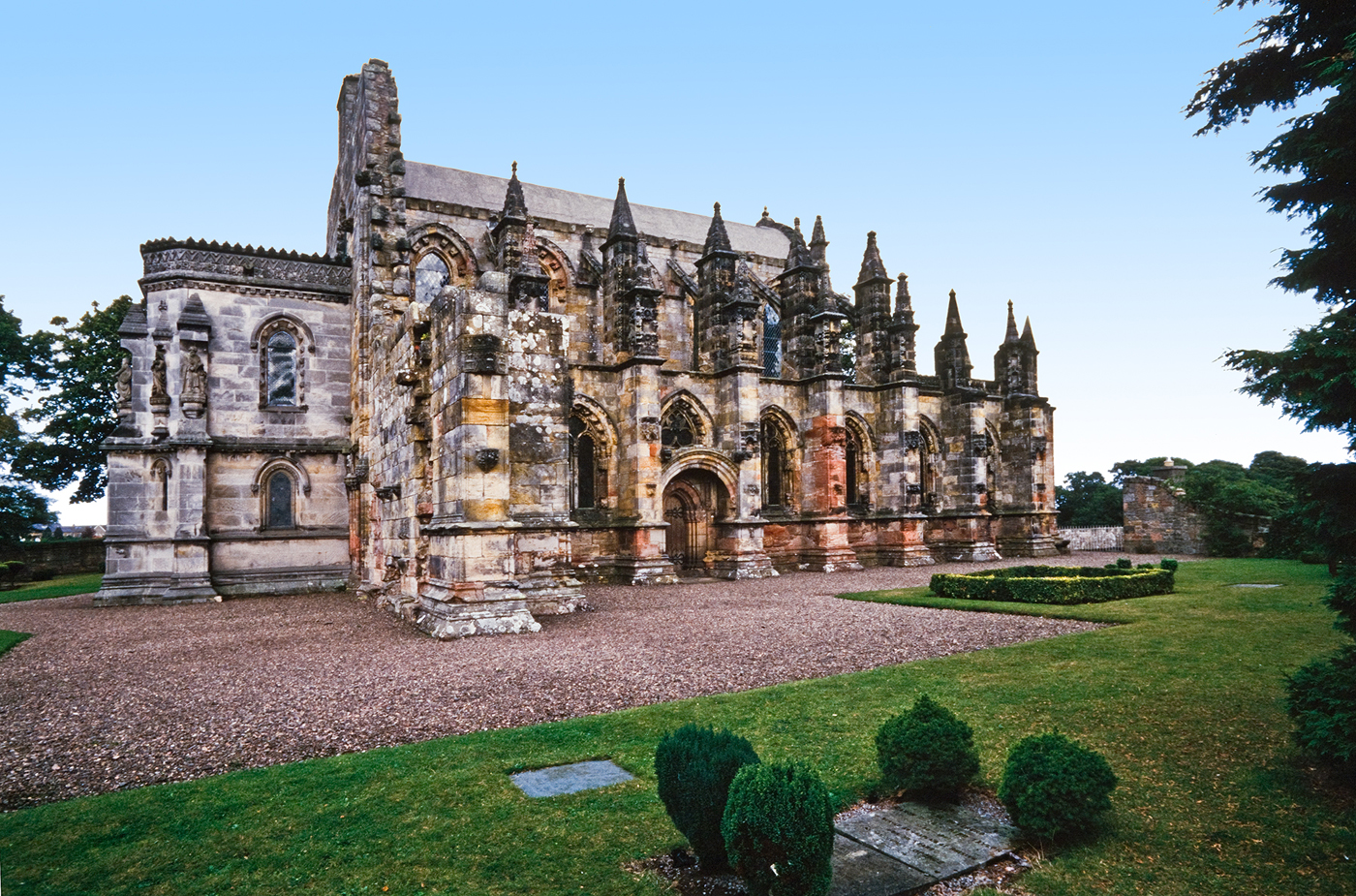 Literary references to the Holy Grail may have come to a screeching halt during the Renaissance, but whispers lingered of holy treasures smuggled to assorted locations. It is rumored the grail was taken to Scotland by Templars and hidden in vaults beneath Rosslyn Chapel (c. 1446). The mystery associated with this church revolves around its benefactors- the St. Clair (or Sinclair) family – and their connection to the Knights Templars, and later the Free Masons. Rosslyn is loaded with extraordinary sculptures speculated to contain Arthurian, Templar and Masonic symbols, offering clues to the Grail or some ancient knowledge- a theory latched onto by Dan Brown’s Da Vinci Code.

A sink hole on Oak Island, Nova Scotia, nicknamed “The Money Pit,” is another possible resting place of a buried treasure, said to be anything from pirate’s booty to the Holy Grail. This too has links to the St. Clair family as the Grail was secretly carried to Nova Scotia (‘New Scotland’) by an exiled Knights Templar, Henry Sinclair, in 1398. No treasure has ever been found.

The Grail trail takes us full circle back to Wales, the birthplace of Arthurian legend, where at Nanteos Mansion (Rhydyfelin), near Aberystwyth, an ancient vessel supposedly performed miracles well into the twentieth century. According to legend, this olivewood bowl, known as the Nanteos Cup, was brought to England by Joseph of Arimathea and held by the monks at Glastonbury. When in the 1530s Henry VIII dissolved the monasteries, monks from Glastonbury fled to Wales with the sacred bowl where it remained in the possession of the Powell-Nanteos family until the 1950s. Unfortunately, over the years this bowl ended up little more than a sliver of chewed wood due to pilgrims biting chunks out of it. Since 2001, the new owners have reportedly locked it away in a bank vault somewhere in England, while skeptics maintain the wood in the bowl dates from the fourteenth century.

Visitors to the many sites on The Grail Trail can immerse themselves in a mystery that has captivated scholars and skeptics alike for nearly two thousand years. And the quest continues along the Grail Trail in France. Watch for part two of the Grail Trail Series next month.