I have been on a bit of an Afternoon Tea odyssey lately. There is something genteel and charming about the formality of it all. Tea cups with roses. Tiny sandwiches. Tiers of minature sweets. While living in England for a few years, friends and I sat sipping darjeeling with pinky’s out at the Savoy. We drove the Fortnum & Mason’s “tea sommelier” bonkers with our indecision over their extraordinary endless options. And we swooned for sweets at Claridge’s, which carries on a 150-year tradition of tea service. It was when a friend invited me for “tea” one evening with her Yorkshire family that I was thrown for a loop, then learned that tea is an umbrella term used by the British for various meals. In this case, tea actually meant dinner. Count me in!

Afternoon tea is not to be confused with high tea (dinner) or a tea break (a drink and snack). In a nutshell, this late afternoon meal became a daily ritual among the upper class in 1840’s England. Queen Victoria’s Lady of the Bedchamber started the custom of taking sandwiches and tea in her room since she would become cranky between meals. The tradition evolved as other famished aristocratic ladies joined in. An array of savory sandwiches, scones, mini-pastries, and tea were formally served between 4 and 6pm. Rest assured no one was going hungry between lunch and supper! The privileged class referred to this ritualistic meal as “afternoon tea,” while their evening meal was dinner or supper. Amongst the working and lower class, lunch was called dinner and dinner was called tea. Safe to say, in no matter which social strata one belongs, if invited for tea, food will be involved.

The custom of Afternoon Tea inevitably found its way into American culture, so where other than Boston (think tea party) could the idea of taking tea be more appropriate?

I accepted a gracious invitation to enjoy Afternoon Tea at the Langham Hotel, one of Boston’s classic Grand Dames. The historic building was built in 1922 to house the Federal Reserve Bank of Boston (a future article about this luxurious hotel is in the works!). Immaculate details channel the Langham’s British roots, while five-star hospitality earns the hotel acclaim: from its striking red hood awnings and top-hat clad doorman, to the signature Pink Taxi at the service of guests. The hotel’s interior is elegant and echoes the building’s Renaissance Revival style of architecture. The Reserve lobby restaurant nods toward Art Deco and is a refined, comfortable space in which to take tea and enjoy people watching.

I’ve indulged in quite a few afternoon teas in my lifetime, but the bar was infinitely raised at the Langham. The savories and sweets came out in four courses, beginning with an amuse-bouche, sandwiches, scones, then dessert. I marveled at how artfully each bite was presented. What I found particularly striking was the chef’s thoughtful and modern riff on the traditional cucumber, egg, and chicken salad sandwiches. Anyone who knows me, knows my weakness for tarragon. The miniature puff pastry shell filled with delicious chicken had just enough hint of onion and tarragon as not to overpower. But, it was the unexpectedly thick, rich salmon mousse on a round of famous Boston brown bread that set me back on my heels. The pop of pink and orange against the dark brown rye was visually enticing. After eating with my eyes, my taste buds were not far behind– and they were not disappointed. No idea how long I sat and savored that moment, but it was for quite some time … If forced to choose a favorite dessert, the peach streusel wins, but a full compliment of sweets was beautifully composed with fruit and chocolate in the mix.

My subconscious must have been yearning for peaches that day, as my tea selection was a definitively peachy and floral blend. It was not too flowery, but had a fine balance of fruit and jasmine. The 30 tea options ranged from traditional English Breakfast and Oolongs to Minty Moroccan and special Langham Proprietary blends. During the dog days of summer, iced tea turns up on the menu. It is served in a carafe paired with a fruit-infused iced tea cube. A great way to keep it cold without diluting. Of three iced teas sampled, the ginger was my favorite. When all was said and done, tea was certainly a meal unto itself. BUT, there is always room for a glass (or two) of effervescent rosê to cap off things.

Afternoon tea at the Langham Hotel was one of my favorite moments while visiting Boston. The service was impeccable and friendly. The setting was sophisticated, yet bustling. I embraced this afternoon tea for all of its experiential worth and it is one that will linger for a very long time. Like I said, this tea reset my bar to a very high standard. These are the types of experiences that make travel special. Next time you are in Boston, I would highly recommend treating yourself! 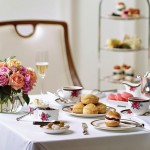 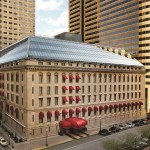 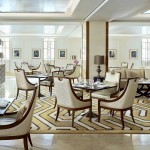 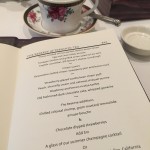 Afternoon Tea with Wedgewood at the Langham Hotel 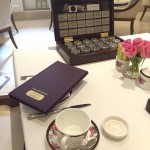 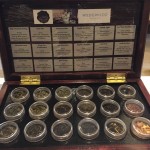 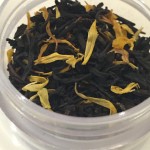 Peach with Jasmine and flowers 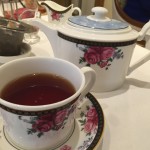 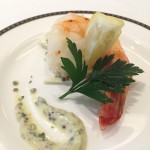 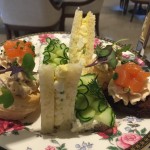 An array of tea sandiwches 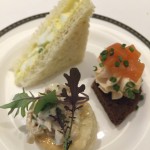 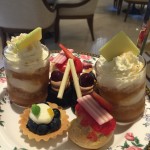 A complement of bite sized sweets 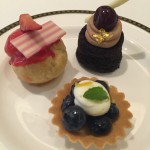 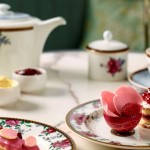 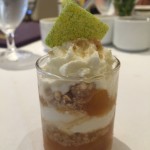 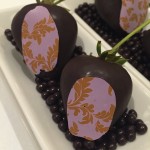 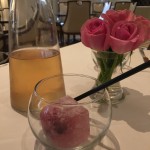 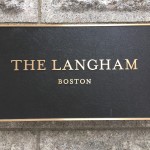 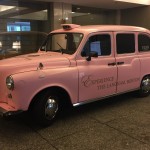