This article was published in Rennaisance Magazine, issue #55.   By Shawnie Kelley

Southwest France is synonymous with sensuous Mediterranean beaches, hillside vineyards and peaceful hamlets, but upon closer look, the Languedoc’s rugged landscape reveals a turbulent history steeped in religious rebellion, bloody battles and grail legend. This region, historically known as the County of Toulouse, is home to the ruins of more than a dozen once-formidable fortresses, perched precariously in the craggy foothills of the Pyrenees. This wild, unspoiled landscape, with romantic vestiges of châteaux inspired the love songs of medieval Troubadours, but also served as the backdrop for one of the Catholic churches greatest heretical challenges. These remarkable castles represent massacres-en-masse, gruesome inquisitions and the ultimate suppression of a peaceful, three-hundred year-old religious movement. This is Cathar Country.

At the turn of the thirteenth century, Christendom’s crusades to secure the Holy Land were in full swing, but Muslims weren’t its only enemy. From the dawn of Christianity, the church struggled to suppress all ideas not inline with its’ orthodox beliefs- including certain reformed Christian groups. Most were easily snuffed out, but by the 1150’s a popular movement, known as Catharism, took root in the liberal regions of southern France.

Cathars (stemming from Katharos, the Greek word for “pure”) hailed from tenth-century Bulgaria, but gained serious foothold in twelfth-century Languedoc. The “good people,” as they called themselves, adhered to a mystical, austere doctrine of non-violence, vegetarianism, sexual abstinence and the renouncement of worldly possessions. Even more controversial and contradictory to Roman Catholic beliefs, were their views on the divinity of Jesus and belief that God ruled Heaven and the Devil ruled the Earth. Much to the Vatican’s dismay, Catharism was wildly popular and, as the region’s primary religion, became a dire threat to orthodoxy. 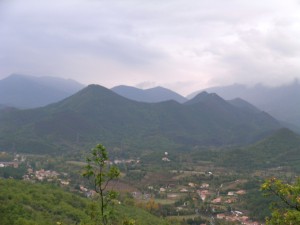 Languedoc fell under the tutelage of the powerful and tolerant Counts of Toulouse, some of whom were active Cathars. Sympathizing towns and strongholds stretched from the Mediterranean Sea into the mountains around Toulouse, where a medieval chronicler claimed was “the source and origin of every form of heresy.” Open criticism of the Catholic Church’s corruption earned the Cathars strong-armed enemies, including Pope Innocent III and the notorious Baron Simon de Montfort. As the keeper of Christianity, the Pope had no choice but to snuff out this heresy once and for all. In 1208, he launched a formal holy war, also known as the Albigensian Crusade, offering absolution of sins to all who took part in the campaign, which was (even by medieval standards) particularly gruesome.

The church did not expect such serious resistance from these leaders and the local populace, so its response was swift and violent. Within two years, a wholesale onslaught of Cathars was underway. Simon de Montfort and the Pope’s armies crushed the towns of Béziers, Minerve and Carcassonne into submission. Upward of 20,000 people were massacred in the first two decades and thousands more hunted down inquisition-style. After two decades of rampant persecution, Cathars had little choice but to head for the hills. The group took refuge in several spectacular châteaux built by the local nobility and given to the Cathars for their protection. Château de Montségur was one of them. 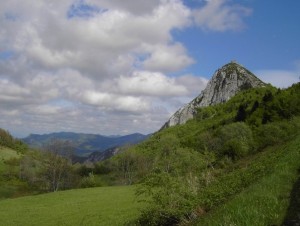 The village of Montségur sits in the shadow of a near-vertical, rocky outcrop to which the shell of a seemingly impregnable castle clings. In 1232, the seat of the Cathar church was moved to this remote location along with the church’s treasury and, as legend holds, the Holy Grail. Montségur quickly became the heart of the Cathar resistance. In 1241, under pressure from the Pope and king, Raymond VII, Count of Toulouse, promised to destroy the castle and suppress the heresy, but did nothing. Two years later, the council of Béziers took it upon itself to “cut the head off the dragon” and sent a force of 10,000 strong to lay siege to Montségur.

In April 1243, the army encircled the hill, hoping to starve the Cathars out. By spring of the following year, the 415 inhabitants of the castle surrendered. Given the option to renounce their faith or be burnt as heretics, this group of Cathars made one last defiant stand. As the story goes, on March 16, 1244, more than 200 men and women refused to convert, were dragged down the hill and marched straight into a bonfire. Montségur fell to French royal forces and the castle symbolically pulled down. It was however, rebuilt during the next three centuries, which is what stands today. 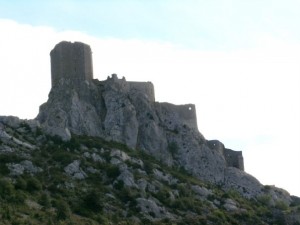 Little evidence of Cathar occupation can be found at Montségur, let alone most castles in Languedoc, but this is not to say one can’t feel their presence. This tragic crusade permeates Languedoc’s very landscape. To climb steep pathways to these impressive locations offers a glimpse of the daunting task facing any army. The feelings of awe, isolation and safety the Cathars must have experienced are not lost on 21st century pilgrims. Hulking ruins of magnificent castles, such as Lastours, Puilaurens and Termes, spring from their jagged rock foundations and can be seen for miles. Among the most breath-taking and best-preserved of the so-called Cathar castles are Peyrepertuse and Quéribus, which can be visited conveniently in a single daytrip. The rigorous trek to any of these castles is rewarded with jaw-dropping views of the mountains, sea and in some cases, other castles. A car is highly recommended to explore Cathar Country on your own. 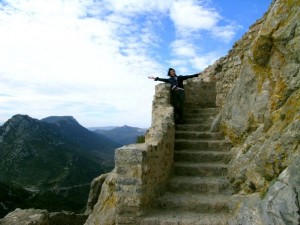