One of the most recognizable fortresses in the world rears up from a volcanic crag in the heart of Edinburgh, Scotland. There is a magical resonance about the mighty Edinburgh Castle, which is seemingly buttressed by the living earth; permanently affixed to Castle Rock.  Anyone trekking up the steep streets through the castle’s zigzagging terraces is rewarded with spectacular panoramic views around the city and into the Highlands. One’s imagination easily takes flight when perched above the city on this 340 million year-old rock. 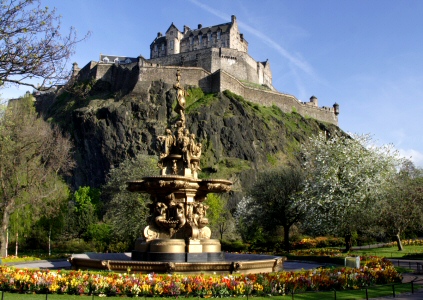 Ten thousand years ago, receding glaciers gouged out the area surrounding Castle Rock, which now defines the west end of the famed Royal Mile. For three millennia, humans inhabited this strategic hilltop location. While material evidence of ancient settlements has been excavated, the first written record of Edinburgh Castle surfaces around AD 600 in the epic Welsh poem, the Gododdin. The elegiac story relays the tale of 360 warrior-princes feasting for a year in the great hall at Din Eidyn, or the ‘stronghold of Eidyn,’ before marching off to a glorious death in battle. In AD 638, the fort at Din Eidyn was successfully besieged by the Angles and its name Anglicized to Edinburgh.

Having the earliest literary reference to King Arthur, the Gododdin eternally connects his legend to the city. The craggy hill opposite the castle is named “Arthur’s Seat,”  while the castle itself, known in the middle ages as Castellum Puellarum (Castle of Women), is associated with the “Castle of Maidens,” home to Arthur’s sorceress half-sister, Morgen le Fay and her seductress fairy friends. 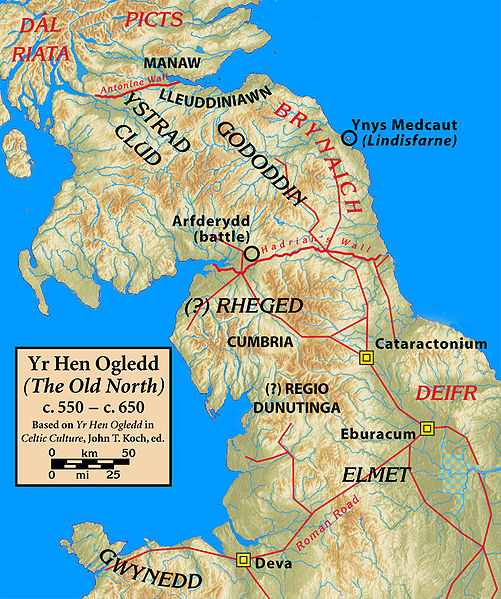 Edinburgh Castle’s history is blurred with legend, but its true roots are traced to the eleventh century when Castle Rock became the site of a permanent fortress. King Malcolm II’s defeat of the English in 1018 secured the region for Scotland.  The earliest royal dynasty attached to Edinburgh Castle, the Canmores ruled Scotland for two hundred years beginning in 1058.

Malcolm Canmore, lived in exile before returning to Scotland to hunt down his father’s murderer- a story famously retold in Shakespeare’s MacBeth. Having avenged King Duncan’s death by slaying the real MacBeth, Malcolm moved into Edinburgh Castle and ruled for 35 years.

His retaking of the Scottish throne was overshadowed by his wife Margaret’s saintly life, which is memorialized in the oldest building in the castle complex. Saint Margaret’s Chapel sits on the summit of the castle. Their son, King David I (1124-53) built the tiny church in 1120, dedicating it to his mother, Scotland’s only royal saint. The chapel served as the royal family’s private oratory until the sixteenth century when it became a gunpowder repository during the Reformation. Saint Margaret must have turned in her grave, but rests in peace knowing the chapel survived the Wars of Independence. 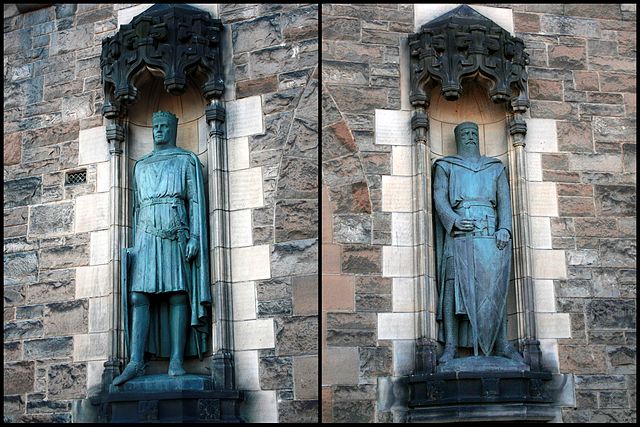 Two contemporary statues (c. 1929) of Robert Bruce and William Wallace guard the castle. The picturesque east gatehouse, renovated in the nineteenth-century, replaced a severely functional gateway guarding the most vulnerable part of the castle- the entrance. In fact, most of the castle was rebuilt in the past five hundred years using a hodge-podge of architectural style: a medieval staircase, a Renaissance palace, baroque barracks and a twentieth-century war memorial.

Naturally, a working castle takes a lot of fire- and Edinburgh was no different. The castle was a pawn in the power struggles between England and Scotland until 1296, when the Wars of Independence broke out. Scotland’s throne was up for grabs and two noble families laid claim to it, including the Bruces. King Edward I of England, known as the “Hammer of the Scots” invaded Scotland. Edinburgh Castle fell to British troops that same year.

Fourteen years later the castle was back in Scottish hands, but not before the country was stripped of its royal regalia. Edward removed the crown jewels to his treasury. The Stone of Scone, a rock upon which all Scottish monarchs were crowned, was taken to Westminster Abbey.  It remained under the coronation throne until 1950, when Scottish students stole it back.  In 1996, the Queen officially returned the Stone of Destiny to its rightful place, where it remains in the Crown Room at Edinburgh Castle- under heavy security. 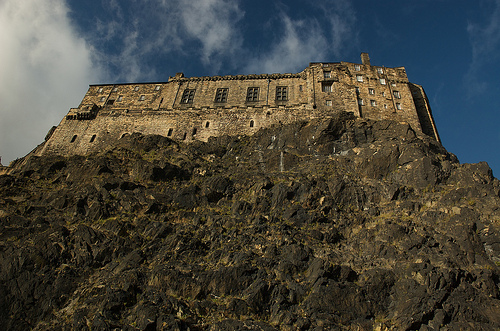 It might have taken seven hundred years for the Scottish regalia to come home, but only one daring attempt would win the castle back from the English.  June 1314, Longshank’s weakling son, Edward II was king, proving an opportune time for Scotland’s leader, Robert Bruce to regain Edinburgh. Castle Rock is not the sort of place taken by storm, but rather by stealth! Soldiers created a diversion at the gatehouse while ‘commandos’ climbed the crag’s precipitous north face to take the castle by surprise. Scotland’s greatest prize fell into Bruce’s possession!

In 1313, King Robert dismantled all castles regained from the English to prevent reoccupation. Despite its royal status, Edinburgh did not escape destruction. All but ‘the royal chapel’ was disassembled but was rebuilt in 1358, when Robert’s son, David II came to power.

To learn more about Edinburgh Castles, visit their website or join our Scottish Highlands Adventure tour which begins in beautiful Edinburgh.