Ode to the Haggis

On Jan 25, Scotland celebrates their National Poet, Robert Burns, with a traditional Burns Night Supper of haggis, ‘neeps and tatties, wee drams of whisky, and lively readings of the great bard’s poetry, including “Address to the Haggis“.

Below, you can read author and Wanderlust Tours owner, Shawnie Kelley‘s article, Ode to the Haggis, as originally published in Renaissance Magazine, Issue 60. Photos courtesy of VisitScotland. 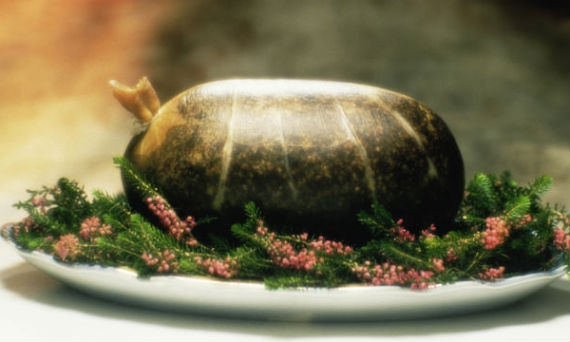 On December 20, 1786, the Scottish newspaper, Caledonian Mercury published the famously grotesque poem “Address to a Haggis,” written by Scotland’s Poet Laureate, Robert Burns. Despite growing up the son of a poor Scottish farmer, Burns achieved literary genius at a young age, becoming an instant celebrity among Edinburgh’s socialites and literati. When asked to pray before a formal dinner, the dashing poet launched into the world’s most famous verse dedicated to a slab of meat, elevating a repulsive poor man’s meal to Scotland’s national dish.

A few years after Burns’s death at age 37 in 1796, friends gathered near his hometown of Alloway in west Scotland to commemorate the life of the great bard. He has since been celebrated every January 25th with a supper that includes traditional Scottish fayre, wee drams of whisky and the recitation of clever poetry, stories and songs. While the formality of Burns Night events varies, the general format has not changed in two centuries. 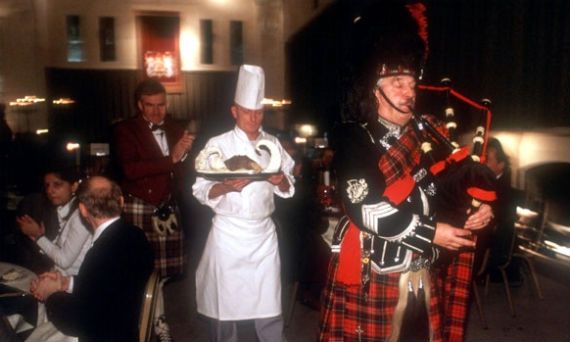 The supper begins with a reading of the Selkirk Grace, a prayer attributed to Robert Burns, after which the haggis is “piped” out in a kilted procession, paraded about the room by the proud chef led by a bagpiper.  The master of ceremonies then addresses the haggis with an animated reading of the poem, after which the “great chieftain o’ the pudding race” is ritually punctured, regally toasted and served up with ‘neeps and tatties (turnips and potatoes).

The meaty concoction, known as haggis, is not unlike sausage in its construction, with meat, oats and other innards stuffed into a casing- which historically happens to be a sheep’s stomach. As revolting as it sounds, haggis was the medieval version of a microwave dinner. Hunters boiled the stuffed stomach directly in water, as not to carry multiple cooking vessels. Another tradition states haggis was born out of necessity during famine. People eat what they have and utilized whatever meat products were available. Modern commercial haggis is safely made, served in artificial casings under strict health regulations. Much to the dismay of purists, some even come in vegetarian form. Whether you find it suspicious or delicious, the “warm reeking” haggis is a central feature of Burn’s Suppers.

Once the haggis is sliced open, applaud resounds and whisky flows. An original speech on Burns’s life and works, known as the Immortal Memory, is offered in the spirit of the poet.  The evening progresses with toasts made not only to Burns and his meaty muse, but also “To the Lasses” in his life -of which there were many- and to the women who cooked the meal. With ladies now permitted to attend the dinners, a “Reply to the Toast to the Lasses” is commonly included. The female guests’ humorous rebuttal often details men’s shortcomings.

Today, Burn’s Night is more widely observed than the country’s national holiday, St. Andrew’s Day. The Son of Scotland would be proud of the tradition given his penchant for humor, drink and carousing. So, kilt up and check with your local pubs about Burns Night celebrations in late January. Chances are there’s one near you.