By Shawnie Kelley, as published in Renaissance Magazine, Issue 58. 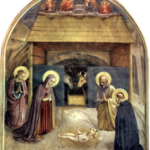 ” … she brought forth her firstborn son, and wrapped him in swaddling clothes, and laid him in a manger, because there was no room for them in the inn …

This line of text has been visualized a thousand times over. The Christmas season is centered on the events leading up to the birth of Christ and one of its most traditional holiday images is the Nativity. Statues of the Holy Family adorn mantels and elaborate manger scenes sprawl beneath Christmas trees- and not much about this has changed in seven hundred years. While images of the Virgin and Christ child were painted in Christian catacombs as far back as the ancient Roman era, it wasn’t until the fourteenth century that the representation of the Nativity as we know it came into popular culture. The gospels of Saint Luke and Saint Matthew offer the most detailed accounts of the birth of Christ. It’s from these Biblical texts that traditional visual images are drawn.

The first nativity scene is believed to have been conceived by the Italian monk-turn-saint, Francis of Assisi, who is credited for humanizing religion and calling attention to the beauty of God’s physical world. As the story goes, in the year 1223, Francis celebrated Christmas in the small town of Grecio. The monastery chapel was not large enough to hold midnight mass, so an altar was created in a nearby grotto. To aid worshippers in the visual contemplation of the birth of Christ, Francis prepared a wooden manager with hay, installed a live donkey and ox, and kindled a number of candles and torches, transforming Grecio into what his biographer called “a second Bethlehem.” The saint’s Christmas tradition was immediately embraced. Recreations of the Nativity spread across Europe, finding its way into the repertoire of French, Dutch and Spanish painters.

The manner in which the Christmas story was portrayed in Renaissance art dramatically evolved over time, mirroring changes in society and shifts in religious attitude. Its depiction moved from a narrow, sacred vision of mother and child to a full-blown cast of humans and animals persisting into to modern times.

At the dawn of the Renaissance, artists’ biggest patrons were the church and wealthy nobles who endowed religious institutions. A majority of early commissioned paintings were both a public display of wealth, and also a ‘picture book’ of Christian doctrine for a mostly illiterate population. Two very popular themes permeated the art of the time- and not just at Christmas: the Adoration of the Child and the Annunciation- the moment Archangel Gabriel, appeared to tell the Virgin Mary she would give birth to Jesus. The paintings were intended to teach about the birth of Christ and the virtues of his mother.

“ … And the angel said unto her Fear not, Mary: for thou hast found favor with God. And, behold, thou shalt conceive in thy womb, and bring forth a son, and shall call his name Jesus.”

During the thirteenth and fourteenth centuries, the “Cult of the Virgin” thrust Mary into the artistic limelight. She was worshipped by Roman Catholics as the ‘Mother of God’ and ‘Bride of Christ,’ so ‘Our Lady’ became the central, often larger-than-life, figure of Nativity paintings for several centuries. Her role in the birth of Christ became one of the most prominent aspects of the story. Countless images of devoted mother and holy child pervade early Renaissance art.

The Annunciation paintings held two important meanings for the faithful: the first being the incarnation- or conception- of Christ, which is the central tenant to the Christmas story. The second being the vision of Mary as the ultimate example of womanhood, chastity and humility. The Virgin’s queen-like demeanor in early Renaissance painting showed dignified seriousness or somber sadness, indicative of her inherent knowledge of what was in store for her son. It took two centuries for the depiction of the Holy Family to evolve into a more ‘earthly’ image, with both Mary and Joseph portrayed as humble, human parents of Jesus, surrounded by their barnyard of animals.

Until the sixteenth century, Nativity and Annunciation paintings remained mystical and devout. The Italian painter-monk, Fra Angelico (c.1436) produced one of the Renaissance’s most sublime Annunciations for the Convent of San Marco in Florence. Mary sits reverently, looking holy and radiant, as even God’s messenger, Gabriel seems awe-inspired. Traditional Annunciation scenes take place either in a bedroom near a bed (to imply the conception of child) or in an enclosed space near a garden, symbolizing both Mary’s womb and her virginity, as in Fra Angelico’s version. The two figures are usually separated by architectural features, creating a certain solemnity and formality between angel and Virgin.

As the Renaissance progressed, the rise of capitalism was particularly significant for art. Patronage passed from the church to princely families. Artists were now employed as commonly by wealthy merchants and bankers as by bishops and popes. Rather than glorify god, this new breed of patron, be they religious, preferred to glorify themselves and their material world. Artists now had the freedom to step away from the rigid constraints of early Renaissance painting to explore new ways of representing religious themes- the nativity included.

The desire for overtly pious art waned. As artistic ideals and values shifted away from the supernatural to the natural world, the mood in both Nativity and Annunciation scenes progressed from a divine, heavenly scene to one of a more “human” or worldly nature. The Virgin was given a motherly dimension, celebrating her earthly beauty. Annunciations developed a personal feeling by bringing Gabriel and Mary together into a single, intimate space, usually a bedroom. The Virgin was now presented as the ultimate example of humility- inviting the viewer to contemplate the image and adopt this same virtue.

Three wise Kings “… opened their treasures, they presented unto him gifts: gold, and frankincense, and myrrh…”

International trade encouraged import and export not only of goods, but also of ideas. Important artistic exchanges took place between northern and southern Europe beginning in the fifteenth century. Italian artists are credited with the increasing naturalism of the human figure and the working out of perspective. Flemish masters (modern day Netherlands and northern France) developed oil painting, which aided in the realistic rendering of humans. These new techniques were shared across borders as merchants and artisans traveled through Europe.

This new realism would come in handy as a more personal approach to religious devotion prompted a more personal art form to develop. Increasingly lifelike figures and detailed landscapes aided viewers in meditation, drawing them into the scene. While nativities retained an overall mystical and heavenly character, the Holy Family seems almost commonplace in many of these same paintings. The art of the Christmas story was evolving.

The Virgin Mary is no longer enthroned, but rather kneeling in front of baby Jesus; sometimes inside a cave, rather than in a stable. This particular image is not found in the Bible, but drawn from the 13th century writings of St. Bridget of Sweden’s vision. Joseph likewise, found his way into the standard iconography of the nativity scene. He is almost universally depicted as a bearded old man, based on the apocryphal book of James and shown asleep or resting his head on his arm- symbolic of his secondary role in Christ’s birth.

Jesus finally became the central figure of his own birthday story. No longer an aloof, statuesque Christ child being adored by a Queen Mother, but rather a living, breathing baby Jesus, surrounded by adoring parents. Quite often, a spotlight shining down from Heaven is the only clue as to the divinity of this bouncing baby boy.

As humanism blossomed, the distinction between the profane and sacred blurred to a point where objects of everyday life were elevated to a spiritual level. Renaissance artists created complex and busy paintings, integrating a host of peripheral figures, such as the three Magi, shepherds, angels and animals. Their surroundings became increasingly domestic.

The wonders of this world turned up in the nativity as a rich visual symbolism. The ox and donkey are traditionally found in the Renaissance stable. Drawing on the words of the Old Testament prophet, Isaiah, (“The ox knows his master; the ass his mater’s crib.”) even the lowliest of animals recognize the son of God. Dogs are interpreted as fidelity and doves as peace. 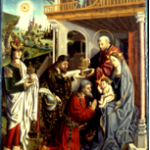 Artists wreathed their scenes in botanicals and natural vegetation, which also held symbolic attributes, understood by all. Naturally, given the outdoor setting of the nativity, a number of flowers, plants and fruits could easily be integrated into the paintings. Violets symbolize humility, the Virgin’s most desirable virtue to be emulated. Columbine, with leaves shaped like a dove stand for the Holy Spirit and fidelity. Sheaths of wheat carry several sacred meanings such as fertility, growth and renewal. Also, it represents the Roman Catholic Eucharist, in which Christ becomes the body (or the bread) and alludes to the town of Jesus’ birth- Bethlehem, which translates to “house of bread.”

Most commonly used is the lily, also referred to as a ‘sword lily,’ which has two meanings. One represents the purity of the Virgin (hence the saying, “pure as a lily”) and another symbolizes the sword that would pierce her heart upon Jesus’ death. Almost every Renaissance image of the Virgin and Child or nativity contains some allusion to the crucifixion or resurrection. Baby Jesus is often shown holding a pomegranate, the red juice representing his blood and suffering, while the multiple seeds signify the church held together by one God. Ivy suggests eternal life, but the most common representation of immortality is the peacock, whose body, according to legend did not decay after death. 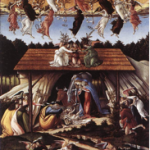 Throughout the Renaissance, painters did not look to antiquity to cloth their figures, but rather dressed them in the latest fashion of their own time period. Likewise, the characters were placed in contemporary architecture and interiors. Therefore, it is possible trace an evolution of fashion, interior décor, tapestries and landscapes by studying nativity and annunciation scenes between the fourteenth and sixteenth centuries.

So this year, when the Christmas cards pour in, make note of the surprisingly large number of Renaissance nativities. Look beyond the holiday greeting and study the details. You’ll find there’s a lot more than meets the eye.

No content or pictures from this article may be reprinted without permission.

Thank you to the Toledo Museum of Art for kind permission to reprint images of paintings from their collections.