As published in the Winter 2012 issue of Edible Columbus.

Les treize desserts de Noël– or the Thirteen Desserts of Christmas- is a delectable holiday tradition celebrated throughout the south of France. An array of symbolic sweets made in Provençal kitchens is reinterpreted here by Pastry Chef Spencer Budros of German Village-based bakery, Pistacia Vera, in collaboration with Edible Columbus Editor-in-Chief, Tricia Wheeler.

Spencer’s festive wreath of desserts featured on this issue’s cover is composed of light and dark nougat, candied orange peel, almond candies and biscuits, chocolate mendicants, raspberry pâte, figs, nuts, spices, and berries.  His sweets are showcased in a more traditional setting in the article, “A Sweet Tradition: The Thirteen Desserts” by Shawnie Kelley Foy.

To create your own treize desserts table, we have included the recipe for zesty candied orange peel and a show-stopping olive oil bread scented with orange flower water and anise seed.  Bon apetit and joyeux Noël.  View recipes online: PAGE 37 & 38 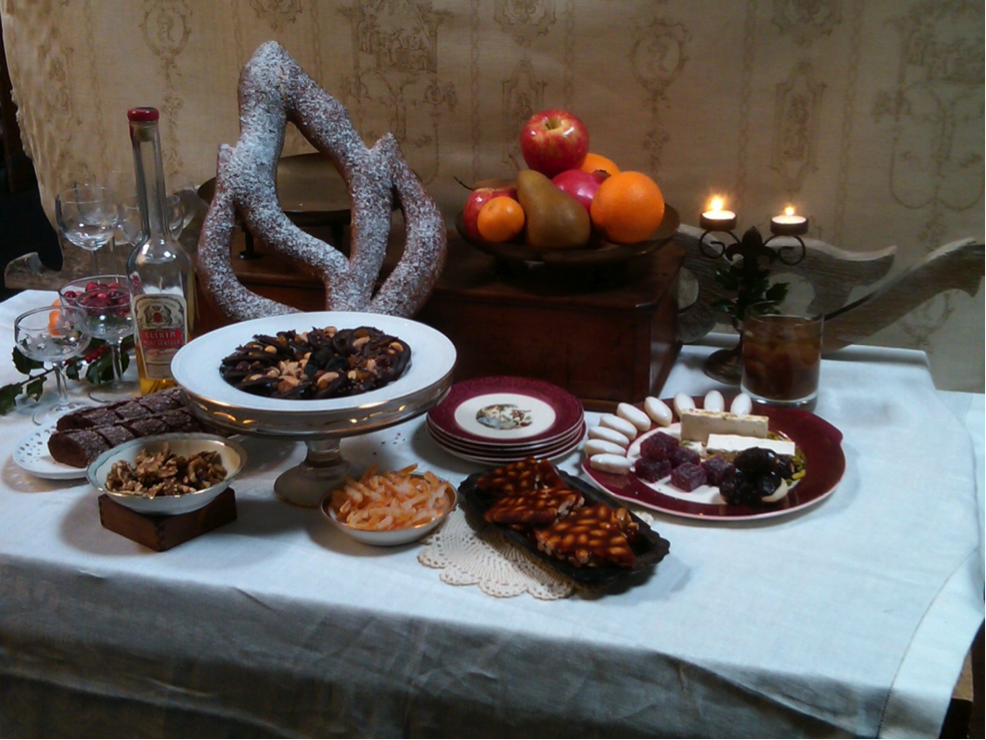 Arrangement by Catherine Murray of PhotoKitchen

A Sweet Tradition: The Thirteen Desserts

In the south of France, as in the United States, the holiday season is synonymous with food. One of the sweetest Old World Christmas traditions takes places every December 24, when a family-style feast known as les gros souper (the big supper) is held in homes throughout Provence. The meatless, seafood-laden meal is followed by a grand finale of les treize desserts de Noël– or the Thirteen Desserts of Christmas.

Every dish and detail, right down to the table settings, is rife with religious reference. The table set with three white linens and three candlesticks represents the Holy Trinity and Hope, while the number thirteen symbolizes the number of people at the Last Supper. In most homes, children are not permitted to dig into the sweets until they name each one and its meaning. Yet, one does not have to embrace this aspect of the celebration to appreciate the sweet ending to a meal symbolically meant to ensure health and prosperity for the coming year.

The exact list of les treize desserts varies between families, villages, and regions, but at least eight remain constant for their specific meaning. Symbolism aside, the innately simple desserts showcase what Provence is best known for: olives, citrus, nuts, and herbs. Keeping focused on seasonal, locally-sourced ingredients, this tradition can be easily re-interpreted anywhere.

The first four desserts- hazelnuts, figs, almonds, and raisins- are counted individually, but collectively referred to as les quatre mendicants (the four beggars). Each respectively represents the Augustinians, Franciscans, Carmelites, and Dominicans- monastic orders which rely on the charity of others- alluding to the season’s spirit of goodwill.  As a nod to the monks’ humble lifestyle, the four are often simply served in bowls. Another popular presentation is to combine all four atop a round chocolate disc, appropriately dubbed a mendicant.

La pompe à huile, a rustic olive oil bread, is made specifically for the holidays. While variations abound, the two most classic recipes, fougasse and gibassier, produce sweetbreads scented with a heady blend of orange and anise.

In a region settled by the Romans, it comes as no surprise that fougasse, the French take on a focaccia-style flatbread, is turned out year round. Indicative of Provençal cuisine, the bread is typically studded with olives, anchovies, and herbes de Provence. During the holidays, the leaf-shaped loaf is super-sized and sweetened with orange flower water.

The brioche-like Gibassier supposedly originated in the village of Lourmarin in the Luberon Mountains. The claw-shaped bread is pierced with holes and spiced specifically with anise seed, candied orange peel, orange flower water, then dusted with powdered sugar.

Whichever variation is embraced, la pompe à huile serves as both a literal showpiece of the dessert table and symbolic centerpiece of the celebration. The party bread is meant to be torn apart by hand rather than cut with a knife. Breaking the bread is meant to bring the family together and protect one’s wealth in the New Year.

Light and dark nougat are the only sweets deemed indispensable of the thirteen desserts. Nougat blanc incorporates pine nuts, pistachio, and hazelnuts, while nougat noir is made using honey and almonds. The nougats are served together as to play off the symbolism of good versus evil, purity versus impurity, and the passage from light to dark days during the winter solstice.

Provençal Christmas cookies span the spectrum from spicy gingerbread to buttery sables, but the almond paste Calissons d’Aix remains the patron sweet of the thirteen desserts. The delicate treats are made by grinding together almonds and candied orange or melon peels then topped with royal icing.  The chewy, diamond-shaped candies have been a specialty of Aix-en-Provence since the fifteenth century. According to legend, calissons were named when a queen’s affection for the confection caused her to swoon the words “di calin soun,” loosely translated to “sweet hugs for my mouth.”

In the city of Marseilles, navettes are the almond cookie of choice. The elongated, pod-like biscuits are orange-flavored and they too come with an ancient legend. In the first century AD, the Biblical figure Mary Magdalene and a few others were set adrift in a row boat from Palestine. Their navette reputedly washed ashore on the Mediterranean coast of Provence, spawning grail legends and boat-shaped biscuits.

The remaining desserts encompass a broad range of fresh, dried, and candied fruit.  Given that fields of fig trees are as common in the Provençal landscape as olive groves, this sweet fruit turns up in the most varied forms: fresh, dried, candied, baked, and stuffed with marzipan—a classic combination closely linked with the city of Avignon.

Bowls brimming with apples and pears are most commonly found in the Alpine regions around Nice, while plums, mandarins, pears, and grapes are most popular in Provence. The sweet-fleshed green verdau melon, nicknamed melon de Noël, is stored until Christmas then displayed on the table with straw, in reference to the bountiful harvest and the Nativity.

Quince paste (pâte de coings), also emblematic of bounty, is a thick jelly made from the nectar of the pear-like fruit and rolled in sugar. Tiered trays display neatly arranged bites of decadent desserts: pâtes, marzipan, and candied fruits are tucked amidst dates, apricots, and figs. Centuries ago, fresh fruit was an expression of wealth and the inclusion of exotic fruit alludes to the rare gifts delivered from far flung lands by the three magi.

A more humble delivery underlies the story of the yule cake, or bûche de Noël. In medieval France, peasants were required to pay a log tax to their feudal lord. This led to an annual custom of bringing a tree trunk into their own home, which was kept burning bright during the twelve days around Christmas. The charred remains of the previous year’s bûche were relit as a starter for the new log, guaranteeing continuous good luck through the upcoming year.  Modern homes no longer require wood burning fireplaces, so the log-shaped Christmas cake symbolically replaces the yule log.

In recent days, the bûche, as well as chocolate, ice cream, fondants, and spice cake have found their way into the repertoire of thirteen desserts. Many of these modern sweets would be unfamiliar to the Provençal peasants among whom this time-honored tradition evolved, but a celebration of old and new is seen here in Edible Columbus’ festive interpretation of les treize desserts de Noël. And remember. Sampling all thirteen is a tasty way to ensure a year of good luck and prosperity. 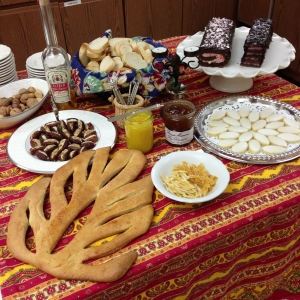