The years following Scotland’s independence, Edinburgh Castle grew into a true royal residence. Robert the Bruce’s son, David II (1356-71) rebuilt the castle.  Well-House Tower was built to protect the water supply, allowing occupants to hold out during long sieges. In 1367, he commissioned the massive L-shaped tower, now known as David’s Tower, but would not live to see its completion. He died in 1371.

David’s son, Robert II, initiated two centuries of rule under a series of unfortunate King James and the ill-fated Mary, Queen of Scots.  James I was keen to emulate the monarchs in continental Europe, but his rule (1406-37) was cut short by murdering conspirators. His young son, James II was smuggled into Edinburgh Castle where he plotted a most dastardly political assassination.

To rid the royal family of the powerful Douglas clan, two Earls of Douglas were invited to dine with the king.  After a splendid feast, the young earls were presented a bull’s head- the symbol of condemnation. Shortly after, they were tried for treason and executed in the castle courtyard. The infamous Black Dinner of 1440 secured the throne for ten-year old James.

James II stood at the threshold of Scotland’s Renaissance. Having married into a powerful French family, the Scottish monarchy saw unprecedented prestige. Hispatronage to the arts, literature and architecture, ensured the flourishing of Renaissance ideals. Edinburgh Castle became a royal residence during his reign (1437-60).  James’s obsession with artillery was his ultimate undoing. One of the two massive siege guns, given as a gift from his in-laws during the ongoing border wars with England, one of the prized cannons went off, killing him.  ‘Mons Meg,’ one of the most illustrious guns of medieval warfare is on display in the castle vaults.

Another Stewart child-king takes the throne. James III spent most of his time in Edinburgh Castle (1460-88).  He redesigned the Palace Yard, now called Crown Square. Unpopular for his lavish lifestyle, James III was, not surprisingly, mysteriously murdered. 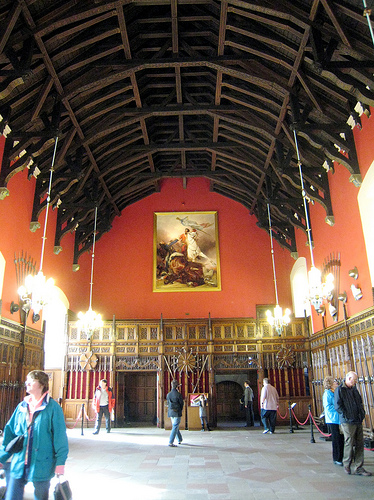 The Golden Age of the Stewart Monarchy peaked under James IV (1488-1513). The handsome, well-educated king was an embodiment of chivalry, charisma and intelligence. He had several lovers and a dozen illegitimate children before securing a wife and male heir. James IV commissioned many of Scotland’s Renaissance masterpieces, including Edinburgh Castle’s Great Hall. It was completed for his marriage to Margaret Tudor, daughter of England’s Henry VII. The Great Hall’s splendid, original hammerbeam roof is carved with thistles and roses, symbolizing the union of Scotland with England. Today, an arsenal of medieval weapons embellishes the walls and the roof remains one of the most important timber structures in Scotland. James IV’s untimely death in the Battle of Flodden forced James V, age 2, onto the throne.

James V (1513-42), another ambitious builder, drew inspiration from the opulent French court. He saw Scotland through its fullest flowering of Renaissance ideals. James upheld Scotland’s “auld alliance” with France by marrying Marie de Guise. Much to their Catholic dismay, a new Protestant religion was spreading like wildfire. Countries picked sides as a religious war was brewing.  James was passionate about suppressing this new “heresy.” Scotland’s first protestant was burned at the stake in 1528. The Reformation began and James’s daughter, Mary made the ultimate sacrifice for the crown.

Mary Stewart was born six days before James V died. They never met and she was crowned Queen of Scotland before turning one. After a childhood in the courts of France, the tall, vivacious queen took up residence in the Palace at Holyrood in Edinburgh. Amidst religious turmoil and political intrigue, Mary moved to the safety of Edinburgh Castle where, in 1566, she gave birth to her only child in a room now known as “Queen Mary’s Room.”  James VI of Scotland, would eventually become King James I of England, thus uniting the crowns of both countries.

Edinburgh Castle has, for a thousand years, been the superintendent of Scotland and serves as its national symbol. It’s operated by Historic Scotland and is home to the country’s tightly guarded crown jewels and Stone of Destiny. 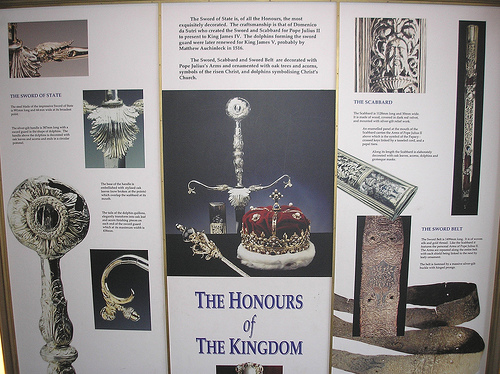