A Taste of Travel: A Culinarian Trifecta in Philadelphia

A Taste of Travel looks at the ways food connects us with a culture and each other. Sharing the recipes and restaurants we have encountered along the way…

It has been a long time since I have visited Philadelphia. The last time (declining to say how long ago) was to give a paper at a conference at the Philadelphia Museum of Art, which has extraordinary South Asian collections, as well as wonderful holdings of Italian and Dutch Masters. But, this article is about food. A two-day whirlwind trip to Philly prompted some focused digging into its food scene, which turned up with what I consider a culinarian’s trifecta. My research required the restaurant easy to get to from where we stayed at the quirky Kimpton Hotel Monaco.

Being a history buff, McGillin’s Olde Ale House made it onto the itinerary. The iconic Irish restaurant is Philadelphia’s longest continuously operating tavern and one of the oldest in the country. Beer has been flowing from its taps since 1860. To be honest, they serve typical bar food like wings, burgers, and meatloaf served up in a casual, festive, noisy setting. I had to go with the Philly Cheesesteak. It was good, as expected. McGillin’s offers an easy experience with good people watching, lots of televisions, and live, local music.

Barclay Prime, however, was the opposite. Refined. Contemporary. Slick. The steakhouse’s groovy, mod “library” ambiance sets the tone for a sophisticated, twenty-first century supper club experience. It certainly lives up to it’s claim as a “luxury boutique steakhouse.” It is located in the historic 1929 Barclay Building on Rittenhouse Square and its menu is heavy on traditional steak and seafood offerings, but served with modern flair. Though I’m not much of a red meat eater… when in Rome! East and West coast oysters and Maine diver scallops for starters; I tasted other’s lobster bisque, Parisian gnocchi, and crab cakes. The seafood set the precedent for my expectation for the meat, which did not disappoint. My main entrée was a mediterranean sea-bass–Branzino, fish (of course), but I had bites of Wagyu filet and NY Strip. It was a melt-in-your-mouth meat moment. In keeping with steakhouse tradition, a coconut cream pie seemed the right choice for dessert. A sweet ending for a most memorable meal. Barclay’s rave reviews are well-deserved.

BUT, my pièce de résistance of downtown food discoveries was Di Bruno Bros. Gourmet Cheese Shop. New to me, but old news to the locals, since it has been in business since 1939. This is a culinarian’s dream store. Having grown up in Pittsburgh, I’m drawn to the immigrant story of two Italian brothers setting up shop and attaining their American dream. Theirs’ is even more of a global American dream, as one can find more than 500 types of international cheeses, making this the area’s largest cheese shop. Besides having a huge cheese cellar and aging room, Di Bruno also carries a vast offering of gourmet international food products, charcuterie, pâtés, smoked seafood, and gift packages.

I always travel with a cooler in anticipation of hauling home edible souvenirs. This Di Bruno visit pushed my little Polar Cooler to its limits. The cheesemongers know their stuff and sold me on it all. I mentioned wanting a funky goat cheese and was given a taste of the funkiest goat cheese to ever touch my lips… and it was incredible. We sampled a new blue from Oregon. Quarter pound please. House-aged Provolone. Yes, please. And on and on it went. My favorite taste was a water cracker topped with a slice of Parmesan cheese drizzled with the mysterious, earthy Bee Raw buckwheat honey from Washington. Returned home with three jars in tow. They say to never grocery shop while hungry and luckily, we just had lunch, otherwise I might have had to purchase another cooler! Di Bruno Bros. has five downtown locations, each a little different from the other. The flagship store in Rittenhouse Square contains an upper level café serving pre-made pizzas, sandwiches, and a coffee bar. 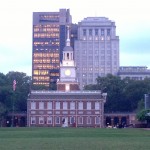 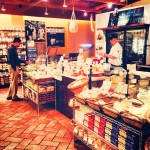 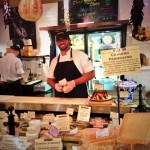 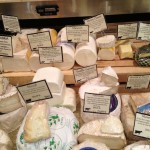 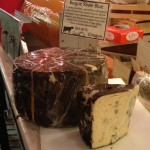 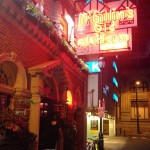 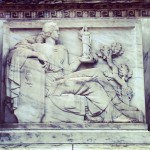