Sanctuary Under the Sea

The Atlantic Ocean along outer Cape Cod is considered one of the world’s top ten places for whale watching. Our favorite tour company, Dolphin Fleet out of Provincetown, has been in business since 1976 and is committed to responsible whale watching and protecting the marine environment. Every trip includes a naturalist commenting on what we are seeing while actively collecting scientific data. The 150-person whale watching vessels leave from MacMillin Wharf in P’town and ventures out of the bay, around the sandy fist of Cape Cod and into the Atlantic Ocean. We sailed along the dune lined coast toward the Skellwagon Bank National Marine Sanctuary, where there is the best chance of seeing whales, sharks, dolphins, and other aquatic creatures. This underwater park, along with 14 others, are protected by the National Marine Sanctuaries.

As I picked up our tickets for the 1:30 excursion, the man in the booth said “I hope your afternoon trip is as good as this morning’s. They saw 30 whales!” That excited me, as I recall being impressed by the 15 or so whales we saw off in the distance on my last whale watching trip ten years ago. We had no idea that this trip would be one that impressed even the captain. The blazing sunshine combined with hypnotically lucid, calm waters added to the experience. This placidity allowed us to see the whales clearly beneath the water, as well as the tell-tale bubblenet– a ring of air released by a group of whales as they surfaced, circling around fish to engulf en masse. That gave us a few extra seconds to ready the cameras! Humpback whales were everywhere!

They spouted, breached, flapped, and fluked (flip the tail) while chowing millions of sand eels swarming just beneath the crystal clear water. A few whales, including a mother and calf, came as close as ten feet to the boat, and several even swam beneath us. It was breath-catching to see these enormous creatures feeding all around us, unthreatened– some even close enough to view the pink tongue and baleen in their open mouths. The naturalist was able to tell us many of their names, ages, and genealogy.

After snapping hundreds of pictures and videos, we decided to abandon cameras and spend the last half hour just enjoying the majestic show of the some of world’s largest mammals… an experience that will linger with me for a very long time. Do not miss this opportunity if you have a few hours to spare while in Provincetown. As of this posting, tickets are $47 per adult and$31 for children (5–12 years old). 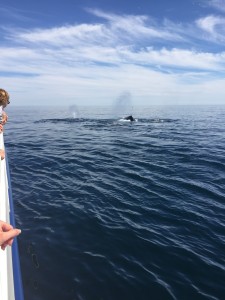 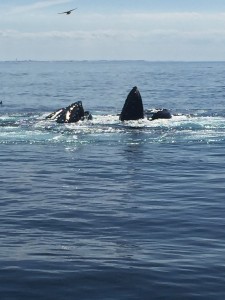