On the Trail of the Holy Grail: Southern France

On the Trail of the Holy Grail: Southern France

Southern France is a hotbed of grail tales with a far flung cast of characters ranging from medieval jongleurs to Knights Templars to the biblical Mary Magdalene.  Local Provençal legends persist that the grail, along with other treasures looted from the Holy Land during the crusades, are hidden in caves, castles, and cathedrals throughout this rugged, mountainous region.

One myth indigenous to southern France states that around AD 40, Mary Magdalene, along with other followers of the crucified Christ, were sent into exile from Palestine.  After being set adrift on the Mediterranean in a boat without oars, the group washed ashore on the south coast of Gaul (ancient Roman France). Mary’s companions supposedly included Lazarus, Martha, Mary Salomé (Jesus’ aunt), Mary Jacobé (mother of apostles James and John) and a young, dark-skinned girl named Sara.  Those supporting the Magdalene grail theory believe Sara to have been the daughter of Jesus and Mary, rather than their Egyptian servant, as Christian doctrine suggests.

It is no coincidence King Arthur and the Knights of the Round Table became intertwined with French literature when England’s King Henry II married the French powerhouse, Eleanor of Aquitaine, gaining her ancestral lands in Southwestern France – the birthplace of troubadours and chivalric poetry.  Eleanor’s courts became famous for patronizing the traveling minstrels who sang of the quest for the Holy Grail, and the poet Chrétien de Troyes served in the court of her daughter, Marie de Champagne, which helped to proliferate the legend.

A thousand years before Chrétien penned his tales of the Arthur and Percival searching for the Holy Grail, oral traditions connected a Biblical figure, Mary Magdalene, to the story. The controversial idea that Mary gave birth to Jesus’ child has been a debated topic in contemporary literature, but it is by no means a new concept.  While one legend claims Mary Magdalene transported an actual chalice to France, another insists that Mary’s body was the sacred vessel carrying the Sang Real (“sacred blood”), continuing the bloodline of Christ.  In other words, Mary was literally the Holy Grail.

Similar to English legends, French lore places the Grail in the protection of Joseph of Arimathea, who was sent fleeing with the three Marys.  The refugees built a small chapel near their landing site on the marshy Camargue shores of southern France, now named Saintes-Maries-de-la-Mer (Saints Mary of the Sea). Here a fortified medieval church has stood ever since, where the relics of three Marys and a “black madonna” statue are venerated in the womb-like crypt of Notre-Dame-de-la-Mer. Each May, thousands of gypsies pilgrimage to this little seaside village for a Gypsy Festival dedicated to their patron saint, Sara.

Learn more about French Arthurian and Grail traditions in the next part this series: On the Grail Trail: The Pyrénées Mountains 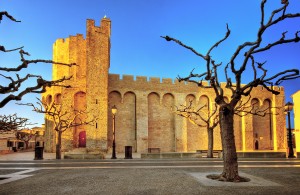