Roman Gaul: A Bit of Ancient History in Southern France

Excerpt from: A Woman’s Guide to France

In 53 B.C.E. Julius Caesar invaded Gaul, and the Romanization of ancient France began. The process began with the taking of Marseilles and , within a year, spread from Provence to Paris and beyond.  While Paris, originally named Lutetia, doesn’t contain many visible Roman ruins, one is able to catch glimpses of the city’s development at a few places in the historical heart of the city on the Left bank.

However, if you want to see the best of Roman France, head south where the cities of Orange, Nîmes, and Arles comprise a holy trinity crammed full of Gallo-Roman ruins. A few days in Provence is enough to cover the preeminent sites, including the jaw-dropping aqueduct spanning the River Gard.

The Provençal city of Arles is a wonderful place to marinate in authentic, local culture while exploring the region’s Roman heritage.  Arles’ first century arena drew 20,000 spectators to gladiatorial battles and chariot races. Today, gawkers pack the place for bull-fights and concerts. The out-of-place-looking medieval tower was added centuries later as Arlesians took up residence within the walls of the arena-turn-fortress. It once contained more than 200 make shift houses which were lived in until the nineteenth century. Other Roman sites throughout Arles include a theatre (50 BCE), Baths of Constantine (fourth century CE), and Alyscamps Roman Necropolis, a burial ground with sarcophagus-lined paths. Arles’ archeological museum contains the largest collection of sarcophagi outside of Rome and a treasure trove of Roman sculpture recently excavated from the Rhone River, including the earliest representation of Julius Caesar.

Nîmes, the “Rome of France,” contains the richest collection of classical buildings in France. As Gaul’s most populated and sophisticated metropolis, it was well-endowed with temples, bathhouses, theatres, and villas. The Maison Carrée, built in 16 BCE, is the best-preserved Hellenistic-style temple in existence. Pop inside to catch a 3-D gladiatorial movie and view the slender, fluted columns up close. Hulking ruins of the enigmatic Temple of Diana sit among the romantic greenery of the Jardins de la Fontaine, which some accounts claim was a sacred site, while others believe it to have been a brothel.

The sculpture-embellished Triumphal Arch of Orange (27 BCE) once protected the northern entry into its namesake city. Orange’s looming Théâtre Antique d’Orange, dating to the first century, was dubbed “the finest wall in my kingdom” by King Louis XIV and is still considered the finest Roman theatre in Europe.  The stage wall continues to serve its original purpose as the backdrop to the city’s summer opera series and a twice-annual Roman festival, replete with costumed gladiators. When leaving town, stop at the Tour Magne on Mont Cavalier to take in the panoramic vistas over Orange. The striking 92-foot tower was once part of the original Roman ramparts and continues to keep watch over Nîmes.

Fifteen miles from Nîmes, the Pont du Gard (40 CE) towers sixteen stories above the scenic Gard River valley, claiming the title of “world’s highest Roman aqueduct.”  This monumental feat of engineering pieces together three rows of arches without mortar or cement.  The lowest, widest level served as a footbridge, while water flowed for a 30-mile descent from the mountains near Uzès along the aqueduct’s upper-most channel to fountains and cisterns to quench the thirst of Nîmes’ 60,000 residents. The Pont’s visitor’s center charges admission, but as a UNESCO landmark, access to the aqueduct is free. Just stroll down the hill where the first glimpse of this 2,000 year old structure is nothing short of spine-tingling; It is staggering enough to cause a first timer to walk right past the massive, gnarled, 1,000-year old, Spanish olive tree; a legend in its own right. 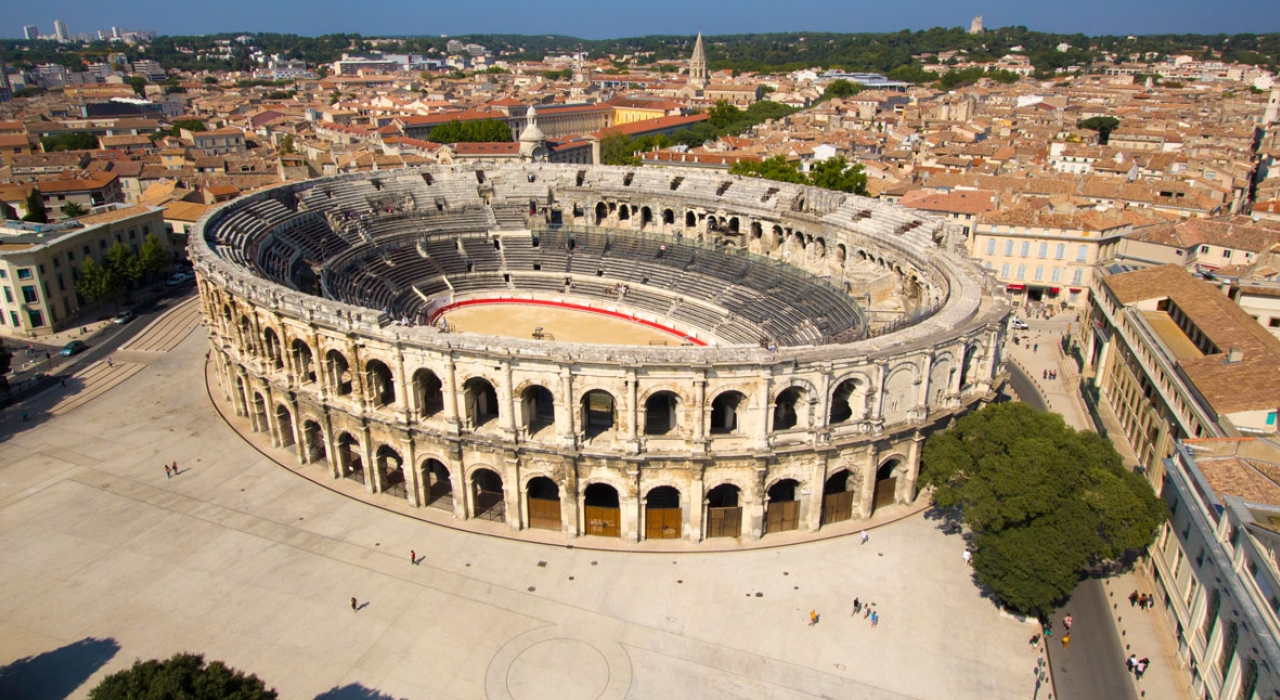